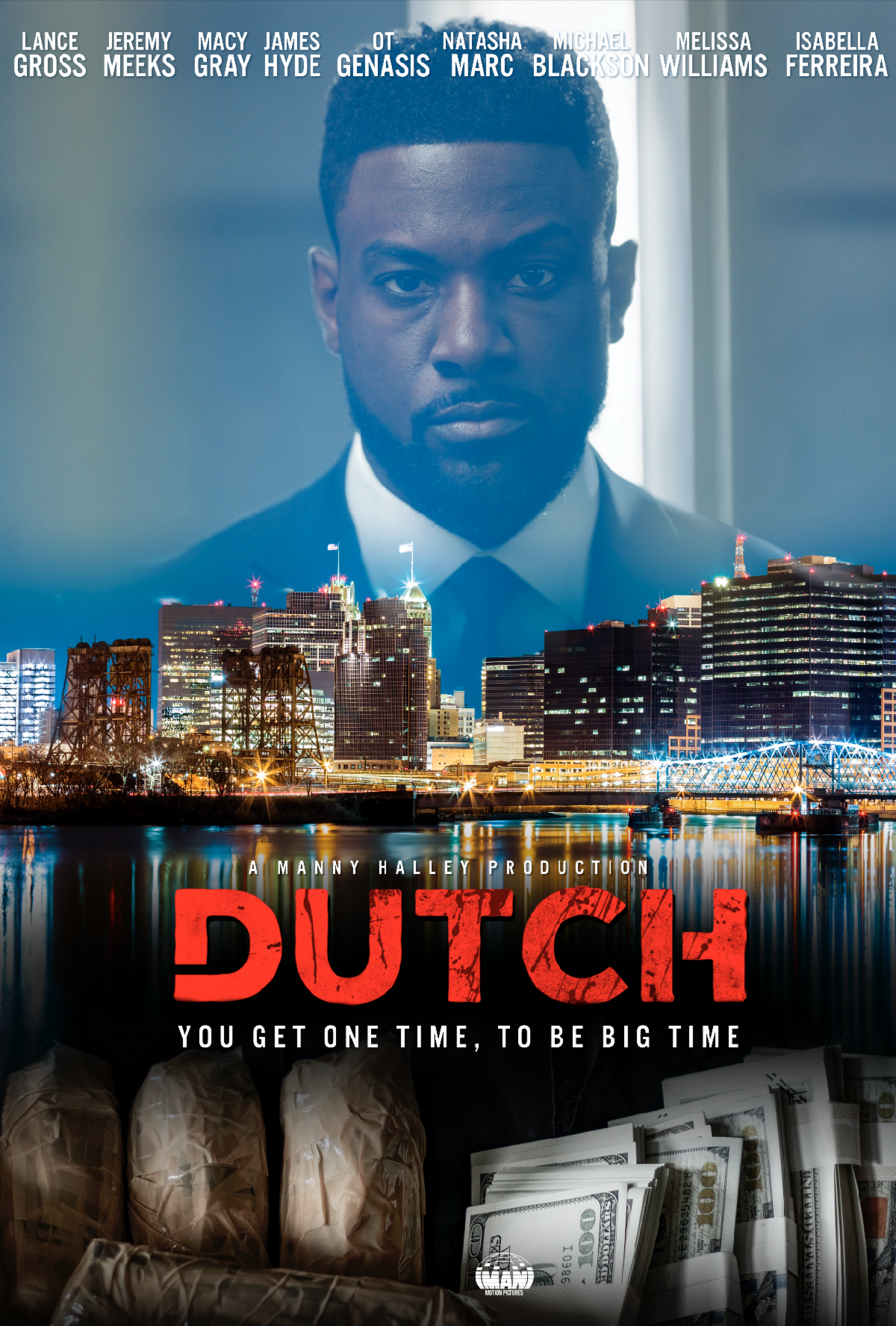 (LOS ANGELES) – March 25, 2020 —  A Manny Halley Production has released the official trailer for the urban lit cult classic DUTCH, based on the first book of an epic trilogy by Teri Woods starring Lance Gross (“Tyler Perry’s House Of Payne”), James Hyde (“Monarca”), Tyrin Turner (“Meet The Blacks”), Isabella Ferreira (“Orange Is The New Black”), Melissa Williams (“Tyler Perry’s The Oval”), Macy Gray (“For Colored Girls”) and Jeremy Meeks, (“True to the Game 2”) with appearances by Michael Blackson (“Nobody’s Fool”), O.T. Genasis and Renny. DUTCH opens in select theaters Fall 2020.
View the trailer here: https://youtu.be/Av6i_R-TnEg
Directed by Preston Whitmore (“This Christmas,” “True To The Game”),
DUTCH introduces us to Bernard James, Jr. aka “Dutch” (Gross), a player who will use any means necessary to dominate the streets and beyond. For Dutch, survival is the ultimate score, and power is the deadliest high of all. When he gains control of an African drug lord’s stolen heroin business, Dutch quickly makes it the most feared drug empire on the East Coast. Naturally, there are plenty of armed and dangerous enemies who would love to take him down, including a vengeful Mafia heir who is also an ambitious DA and former friend.
Dutch knows that as a drug kingpin, his life is on the line which makes him paranoid. He begins to see an enemy in everyone he meets — however he still has to play the game. With his killer looks and charm, Dutch can seduce any woman he wants, but there’s one woman who he can’t resist. She will shake his ice-cold control to its core, making him risk it all for a betrayal he never saw coming.
Supporting cast includes Markice Moore (“Snowfall”), Miles Stroter (“The Quad”), Robert Costanzo (“Modern Family”), and Natasha Marc (“Ballers”).
“We really got our hands on an all-star cast,” says Manny Halley, DUTCH producer and founder of Imani Media Group. ‘DUTCH‘ is an iconic story within the urban literary genre, so we had to get every detail right — and I think we did. Fans will be looking for us to finish the trilogy with this one!”
DUTCH is written by Preston Whitmore and produced by Manny Halley, Rodney Turner II, and Yolanda Halley.

Imani Media Group is a Los Angeles based entertainment music, motion picture and tv production, a distribution company with a satellite office located in Atlanta, Georgia. Imani has worked in the music industry for over 20 years with recording artists such as Nicki Minaj, Young Thug, and Keyshia Cole. Imani’s first foray into television production began with the BET reality series “Keyshia Cole: The Way It Is” and the spinoff “Frankie and Neffe.
Imani Media shifted its focus to feature films in 2017 with the release of TRUE TO THE GAME, starring Columbus Short, Vivica A. Fox, and the late Nelsan Ellis. The film is an adaptation of the New York Times bestseller by Teri Woods. TRUE TO THE GAME is an urban love story between a prominent Philadelphia drug dealer and a woman, as they struggle to balance street life and love. The film was independently financed and distributed by Halley and earned $1.2M in a limited release. Halley has secured deals w/ Viacom BET and NetFlix on this first go around.
Admin
0 Comments